More from LJWorld.com: In Cold Blood: A Legacy

An angry, grey sky hangs above the hillside at Mount Muncie Cemetery in Lansing and the condition does little but add to the darkness surrounding the two cold, granite tablets plotted in section 34, row 29.

At first glance, there's nothing remarkable about the two graves - their stones are miniscule compared to the mammoth headstones in other areas of the cemetery. Weeds, threatening to erase any reminder of their presence, flank the markers.

Although indistinct, of the 28,000-some plots at Mount Muncie, these two seemingly anonymous graves draw the most visitors, cemetery manager Gene Kirby said.

Kirby, standing over living history and buried evil, kicks away some of the weeds encircling the graves.

"More people ask for them than everybody else put together," Kirby said. "People come here for these guys all the time. We don't even have to look 'em up. They say 'Hickock and Smith' and we bring them right here."

Here are the final resting places of Richard Eugene Hickock and Perry Edward Smith, killers convicted and executed for the 1959 slayings of the Herbert Clutter family in Holcomb. Their crimes were documented and the men made famous in the legendary book, "In Cold Blood," by Truman Capote.

Thursday, April 14, marks the 40-year anniversary of Hickock and Smith's execution at the Kansas State Penitentiary, which has since been renamed the Lansing Correctional Facility. According to documents at Mount Muncie, the two died from "respiratory paralysis" after they were hung from the gallows in a corner of the prison warehouse.

Only a few miles separate Hickock and Smith's graves from the prison. Just a few more separate the prison from a Basehor-area home where the descendants of a Kansas Bureau of Investigation agent instrumental in the killers' arrest reside.

Mount Muncie Cemetery manager Gene Kirby clears weeds away with his boot on the headstone of Perry Smith. Smith and Richard Hickock are buried next to each other and remain today the most popular plots of the Lansing cemetery. Smith and Hickock were the subjects of Truman Capote's book, "In Cold Blood," which recounted the brutal murder of the Clutter family in Holcomb.

Darlene Laffere is the daughter of the late Clarence C. Duntz, or "C.C." to his friends. Darlene's husband, Vernon, a fellow lawman like Duntz, remembers his father-in-law as a buddy with whom he forged an enduring friendship that lasted until the man's death.

While the Hickock and Smith case received more notoriety than any other investigation Duntz worked on, he contributed to several other high-profile probes as well. Most notable was the apprehension of killers James Douglas Latham and George Ronald York.

Duntz, an old western Kansas cowboy and former police chief of Hays and sheriff of Hays County, held a firm belief in justice. He helped put all four of the murderers behind bars and held audience during the last few minutes of their lives.

Vernon said Duntz held no ill will toward any of the men he arrested. He believed the death penalty was a price murderers should pay for what they owed society. Right is right, after all, and one life for another is how to get square with the house.

"When he put people in the penitentiary, they didn't go in as enemies," Vernon said. "They went in as friends. For a man who handled so many criminals, and some were pretty tough, he never lost his belief in humanity. Even with Hickock and Smith."

That he never judged the two men spoke volumes about Duntz's character. After all, he'd seen what they'd done to the Clutter family in Holcomb.

It's a warm Saturday afternoon at the Laffere family home in the Glenwood Estates subdivision off County Road 2 in southern Leavenworth County. Inside the cozy house, and just past the front door, rests pictures of children, grandchildren and other family members, all of whom smile brightly for the camera.

It's a scene of Rockwellian bliss, how the Lafferes display their family with pride. Duntz, a devout family man, would have been envious. 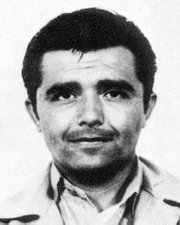 Just a few feet past the living room, however, the serenity ends, for the moment at least. Lying on the kitchen table is a copy of "In Cold Blood," inscribed to Darlene and Vernon and signed by author Truman Capote, and off to the side is a black-and-white archive of newspaper clippings documenting the hunt for those responsible for the Clutter family murders.

That's what newspaper headlines shouted in bold print in 1959 when writing about the fate of the Clutters. Duntz had a different word for it. 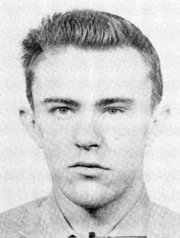 "(He said) it wasn't just a murder," Vernon Laffere said. "It was an execution. A horrible execution."

Vernon, whom Duntz had convinced to become a trooper with the Kansas Highway Patrol, was made privy to details surrounding the murders and was shown photographs of the crime scene one Sunday afternoon. Fearing that his daughter would find them troubling, Duntz wouldn't allow her to see the pictures.

"I guess he thought I would have been upset by it," Darlene said.

Decades later, Vernon can still recall with clarity the details Duntz relayed to him concerning the brutality that transpired inside the Clutter family home.

After the murders had been reported, Duntz was among the first KBI agents on the scene. Duntz, at the time a veteran with four years of KBI experience, was familiar with troubling crime scenes, but the actions of Hickock and Smith were "the worst he'd ever seen," Vernon said.

The killers came to the house to rob the Clutter family of a safe. The family didn't have a safe and told the killers as much. Still not convinced, they executed family members one by one in an attempt to learn the non-existent safe's whereabouts.

In the end, they left Holcomb with some loose cash, an old radio and the blood of four innocent people on their hands.

The pursuit and apprehension of Hickock and Smith are well documented in Capote's book, a best seller, and have been the subject of endless followups in newspapers and magazines. Most recently, the Lawrence-Journal World published a thorough examination of the case, completed by a reporting class from the University of Nebraska-Lincoln.

The contribution to the case of Duntz is less well known. He is mentioned only sparingly in the book. As Darlene said, her father "wasn't one much for the press," didn't care for Capote's book and was just fine being outside the glare of the spotlight.

"I don't think Dad ever really felt comfortable with (Capote) or the book," Darlene said. "There was too much of it he didn't agree with."

"He thought (Capote) fictionalized," Vernon said. "Of course, he didn't like that. He dealt in facts."

Fanfare notwithstanding, Duntz's hallmarks as a law enforcement officer - investigation and interrogation - played key roles in locating, arresting and convicting Hickock and Smith.

Jack Ford, who would later become director of the KBI, spoke at Duntz's funeral in 1991 and remarked about how well the agent did his job without seeking credit.

"Clarence tended to shun the spotlight of publicity and chose to remain in the background," Ford said. "However, in the major case investigations he was involved in, his investigative talents contributed heavily to their successful solution and prosecution." 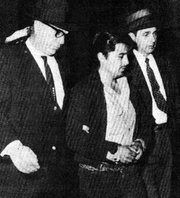 "His was a sharp mind," Vernon added. "He knew where he needed to go to get from here to here to here. I've never seen the man have any outbreak of temper. He was a pretty calm, cool, collected individual."

During investigations, Duntz was a "leg man," Vernon said, and exhaustively examined lead after lead. During interrogations, he used a Columbo-like tone with suspects. He never accused them of the crime but made them explain a mountain of facts weighing against them.

Interrogations were much like a poker game, and more often than not, Duntz was sitting across the table from his opponent with four aces. By the time Duntz, began interrogating Perry Smith, he had all the winning cards he'd need.

Duntz and KBI special agent Alvin Dewey whittled away at Smith's story until they had him pinned. It was classic Duntz - he and Dewey presented fact after fact until Smith's story deteriorated.

"The criminal thought he was very intelligent, but Clarence knew he was a little more intelligent," Vernon said. "The more you keep them talking, the more they're going to wrap themselves up in a lie."

Vernon has his own tale for the night of April 14, 1965, when Hickock and Smith were executed.

At the time, Vernon, a trooper with the Highway Patrol, was traveling along State Avenue when he noticed a suspicious black Cadillac. A rumor had been circulating throughout the night that an attempt might be made to spring Hickock and Smith from the prison before the execution could take place.

Remembering this, Vernon radioed into dispatch, gave the vehicle's license plate number, and was told to "break off him."

He was not given a reason. Instead, he maintained pursuit of the Cadillac, which headed north on Kansas Highway 7. When the Cadillac reached the prison, guards at the front gate informed Vernon of the driver's identity.

"He said he's the hangman," Vernon said. "And then (the hangman) went inside and did his duty."

Duntz and his fellow investigators were also inside doing their duty.

As Vernon said, there were no hard feelings between Duntz and the criminals he helped put behind bars. Smith was no exception. In fact, though Duntz abhorred Smith's role in the killings, he considered Smith a better man than Hickock, whom he labeled cold-blooded and manipulative.

"Nice to see you," Smith reportedly said to KBI agents, including Duntz, as the condemned man walked to the gallows. The agents had already watched Hickock die. A few minutes later, they saw Smith fall to the same fate.

Duntz went on to have a 20-year career in the KBI and later became an investigator for the Kansas Supreme Court. Family members recall Duntz as warm, friendly and colorful. He never went to a state where he didn't know someone and he often played as hard as he worked. He lived life to its fullest, bear wrestled and defeated any challenges along the way and served his fellow man with courage and dignity.

He died in August 1991, at the age of 81, from a brain aneurysm. He was at the racetrack, betting on the ponies when it happened. If he hadn't passed away, Duntz probably would have gone dancing later that night, the Lafferes said.

"If I can have half the fun he had, I'll be all right," Vernon said.

Darlene said her father's funeral service in Topeka was well attended by friends, family and law enforcement officers from throughout the country.

"They couldn't seat everybody in the church," she said.

Duntz's fate is a polar opposite of that of the most nefarious criminals he put away.

Speaking just feet from their graves, Kirby said Hickock and Smith were buried at Mount Muncie because none of their family members claimed the body. The state picked up the burial costs. The cemetery manager said history buffs and curious on-lookers visit the site often.

He doesn't imagine the tour he's giving today will be the last, especially now in light of the 40th anniversary. He said he didn't mind showing people the graves; by now it's become routine, but the allure is lost on him.

As the steely gray sky overhead thickens, Kirby glances up, looks down at the graves and asks a question nobody here can answer.

"I wonder how many people go out to western Kansas and look at the Clutter family graves?" Kirby said. "Makes you wonder why everybody comes here, doesn't it?"