Basehor — If the match hadn't taken place in January, it would've been easy to mistake the 145-pound championship Saturday at the Bobcat Classic for being a showdown in the state finals.

It certainly had that feel. 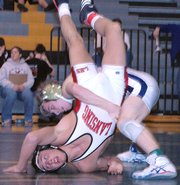 When the final whistle blew on what was arguably the most spirited match of the tournament, the Aquinas faithful flooded the gym with boos while the rest of the crowd thundered with approval.

An exhausted Flynn shook the Aquinas coaches' hands, then walked to LHS coaches Ron Averill, Scott Terron and Lee Matzeder and collapsed into their arms. Flynn, ranked fifth in Kansas in Class 5A, had just completed what many believed to be an impossible task: he took down two No. 1-ranked wrestlers and won the Bobcat Classic.

"It was tough, and if it would've been on paper or anything I don't think I could have done it," Flynn said. "It felt good to know that I could push myself that far and my partners in practice have pushed me that far, so I've got to give credit to the practice partners that have helped me go all the way."

Flynn specifically mentioned teammate Kyle Buehler - who defeated Millstead in the 135-pound state finals last year - as one of those practice partners.

'I think he's taken a lot of confidence in the fact that as long as he can keep a match close, he can be in it with anybody," Averill said. "And he's following through on his shots a little better. In the past he's done a lot of good things, but he hasn't always followed through. We've worked on his hop position a little bit, and he's really cleaned that up. That's why Millstead wasn't able to score on him later in the match."

"Millstead has been a competitor for my brother, Buehler and now me," Flynn said. "To be seeing him now is just a heads-up to the state tournament and I can't wait."

Considering both Flynn and Millstead are in 5A, it's possible that Saturday's showdown could've been a preview of the state finals. Averill said that is a realistic possibility.

"With the win he had in the semifinals and now this, a state championship isn't any bigger than what he's done here," Averill said. "There's nothing out of the realm of reality for him."

"I think the greater thing for them was the way they came back and competed after they lost," Averill said. "It says a lot about their integrity and character."

Wood said it was frustrating to lose his first match of the season, but he said he would learn from it.

"It showed me what I did wrong and what I need to work on now," he said. "It makes me mad that I lost, but I'd rather have it now than later in the year."

Lansing next competes at 9 a.m. Saturday at the Holton Invitational.