Peter Gomez, at home in Bonner Springs, fought in what he describes as “the forgotten war," Korea. 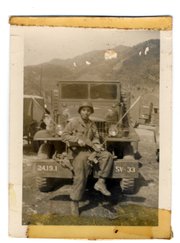 Peter Gomez poses on a Jeep during the Korean War.

Bonner Springs — Pete Gomez was 19 when he fought in what he describes with no apparent bitterness as “the forgotten war.” That was the Korean conflict, so-called because the United States Congress made no formal declaration of war.

Gomez took part in the bloodiest of the war’s battles, in Taejon in the north of what was then Korea. The three-day fight in the first days of the war, July 1950, saw Gomez’s unit, the 34th Regiment of the 24th Division, lose all but 184 solders of a regiment that had numbered nearly 2,000.

One of the reasons for the defeat, Gomez said, was that “we didn’t have the proper equipment … we didn’t have enough to knock out the T-34s,” Russian tanks.

“We were almost shoved out into the ocean,” Gomez said of the battle, before the rest of the 24th Division, led by Gen. George MacArthur, pushed into North Korea and cut off Korean supply lines.

Gomez said he was fortunate and didn’t get wounded in the battle.

“The guy beside me got hit,” he said.

Gomez said he had heeded advice about not getting too close to any of his fellow soldiers, but still “I did have one good friend,” who died at Taejon.

“Billy Graham (no relation to the famous evangelist) was in a building firing at a tank with a bazooka,” Gomez said.

The shot missed, but another enemy tank’s crew saw where the bazooka had fired from and attacked the building. Three of the four soldiers there died, Gomez said.

The 24th pushed north to Pyongyang and the Manchurian border before the Chinese army pushed it back to the 38th Parallel, the line that marks the border of the demilitarized zone, a no-man’s land that to this day separates North and South Korea.

Gomez went home in April 1951, on a ship that took two weeks to reach San Francisco. He remembers sailing under the Golden Gate Bridge, but “there was no such thing as big parades and celebrations,” he said. “It was the forgotten war.”

From San Francisco, Gomez flew home on TWA, and still has his plane ticket, dated May 22. He keeps it in a scrapbook, along with other documents, photos and badges from his time in the service.

Eventually he was assigned for a year to a construction battalion in Colorado Springs, where he learned to maintain and repair diesel engines. That led to his post-Army career: working on locomotives at the Sunflower Munitions Plant near De Soto. He worked there for 40 years, the last 12 as a maintenance supervisor. He’s retired now.

Five years ago Gomez visited South Korea with his wife, Trina. Gomez said he wouldn’t have recognized Seoul from his previous visit because of all the growth and modernization of the city, which he said was “destroyed” when he’d last seen it some 50 years ago.

Gomez is an active member of Veterans of Foreign Wars Post 6401 in Bonner Springs, as well as the Korean War Veterans Association, which recently completed a memorial to the war in Overland Park.

These days he enjoys pheasant hunting and taking part in veterans’ organization activities. He keeps and maintains an old two-and-a-half ton Army truck the groups use in parades, which he drove in the Veterans Day parade in Leavenworth.