The Basehor-Linwood boys blew out Ottawa, 65-50, in the Class 4A state semifinals on Friday in Salina. Enlarge video 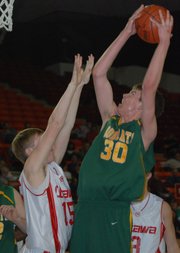 Salina — Of all the times for an opponent to try pressing Basehor-Linwood, the Class 4A basketball state semifinals was the perfect time — for the Bobcats.

The Cyclones hit Basehor with an early full-court trap. The Bobcats handled it with ease and then settled into an electrifying offensive rhythm that didn’t slow down until the second half. By then it was too late for Ottawa as Basehor built a 19-point halftime lead and cruised to a 65-50 victory Friday night at the Bicentennial Center.

The Bobcats now have a date with Girard at 6:15 p.m. Saturday in the state finals.

“Those three seniors that start for me (at guard), one of ‘em started as the point guard on the freshman team his freshman year, one of ‘em started on the JV team as a freshman and the other one started on the varsity. You want to press three senior guards that have played point guard for us for three or four years … it’s going to be tough to press us,” BLHS coach Mike McBride said. “To be honest with you, they’re the first team that’s tried it all year. Even Sumner Academy didn’t press us.”

The Bobcats (21-4) wasted no time showing why pressing them is a bad idea.

After Ottawa’s Eric Messenger buried a 3-pointer on the opening possession, Basehor came back the other way and senior Chandler Schaake found senior Anthony Pierce for a layup. Moments later, freshman Ryan Murphy scored on a put-back for a 4-3 lead at the 6:10 mark of the opening quarter. The Bobcats never trailed again.

Schaake buried 3-pointers on each of the next two possessions, pushing the lead to 10-3 and forcing Ottawa to call a timeout. It didn’t matter. BLHS kept its foot on the gas for the rest of the quarter and opened up an 18-9 lead on 7 of 13 shooting.

That was just the opening act, because the Bobcats grew even hotter in the second quarter. Senior Tanner Bowers fed junior Clint Schierbaum for a lay-in that pushed the lead to double digits. Two possessions later Ottawa turned the ball over and Schaake went the other way for a layup.

A free throw by Colin Murphy and two straight buckets by Ryan Murphy extended the lead to 27-14. Then, to close out the first half, Pierce, Schaake and Bowers — the three senior guards — knocked down treys on successive possessions and sent BLHS into the locker room with a 36-17 lead.

The Bobcats were scorching on offense in the first half. They hit 66.7 percent of their field goal tries (14 of 21) and made 5 of 7 attempts from beyond the arch.

Offense was only half the story, however. BLHS also was stellar on defense. It held Ottawa to 6 of 15 shooting in the half and constantly pestered Cyclone sharpshooters Adam Hasty and Kevin Barber.

“We were playing great defense and hedging all over the place on their shooters and we just came down and I felt like we hit every open shot we had,” McBride said.

McBride admitted he wasn’t comfortable with the large lead. He expected the momentum to change at some point. It did for most of the third quarter.

Ryan Murphy scored on a lay-in on the opening possession of the third quarter to push the lead to 21 points, but BLHS went scoreless for the next 4:30 and turned the ball over four times.

Fortunately for the Bobcats, that massive halftime lead came in handy, as did their defense. Ottawa still trailed by 13 points after the Bobcats’ cold spell.

A lay-in by Colin Murphy at the 3:03 mark of the third quarter pushed the lead back to 15. Ottawa continued to battle back, however. Barber buried a 3-pointer, Jake Moore scored on a turnaround and Barber threw down a one-handed dunk off of the second of three straight BLHS turnovers. Messenger knocked down two free throws at the end of the quarter and pulled the Cyclones within 41-32.

“When you come out that focused (in the first half), when you play that hard, it’s a game of ups and downs and you’re going to be flat somewhere through the game,” McBride said, “so we knew we had to fight through something.”

After surviving the third quarter, the Bobcats regained their stride in the fourth quarter as Schaake knocked down an early trey. The next time down the court Schaake fed a pass to Ryan Murphy for a lay-in that pushed the lead to 46-32 with seven minutes left.

The Bobcats attempted just one field goal the rest of the way — a lay-in by Colin Murphy with two minutes remaining — because the Cyclones began fouling early. It didn’t make a difference because Basehor made 17 of 23 free throws in the fourth quarter.

Barber led Ottawa with 17, Hasty had 16 and Messenger finished with 10.

Now the Bobcats will turn their focus to the state finals against Girard, which ousted defending champ Hayden in Friday’s other semifinal matchup. It will mark the final game for seniors Pierce, Bowers, Schaake and Justin Gripka. McBride said he was happy for his seniors end their careers in the state finals after helping build the program during the past four years.

“You couldn’t ask for a better group of seniors. They did everything I asked them to do,” McBride said. “If I asked them to get home at 10 o’clock on a Friday because it was the best thing to do, they did it. They reeled in the freshmen, they reeled in the one transfer we have that’s out there. They reeled in a couple of guys and they didn’t really ahng out together, and they made them all hang out. That was the thing that was great about the seniors is they made everybody feel special, they made everybody feel like it was their time. I’m not sure how many hours they put in of Xbox, but instead of going out like some teams do and doing the wrong things, they really made sure that we stayed focused all year.”