Jim Stanley, Bonner Springs, speaks with a group of students while participating in a Lewis and Clark expedition re-enactment. 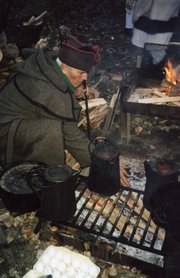 Jim Stanley, of Bonner Springs, cooks over an open fire while re-enacting a portion of the Lewis and Clark expedition. Stanley has been involved in historic re-enactments for more than 30 years and a few years ago participated in a four-year re-enactment.

As a child, Jim Stanley hated history classes in school.

“I didn’t like it mostly because it just seemed like dates,” Stanley said. “When they teach history today, they don’t get into details to make it interesting. There is just too much to cover.”

But today, the Bonner Springs resident has spent more than 30 years of his adult life re-enacting many of the history lessons he was supposed to learn as a child. One such experience took Stanley on a four-year expedition following the footsteps of Meriwether Lewis and William Clark from Pennsylvania to Oregon and back.

“It was a chance to do something that was a once-in-a-lifetime experience,” Stanley said. “To travel across the country by river, by horseback, by hiking.”

Stanley started his re-enactment career joining a group of people focused on the fur trade era. Stanley said there were many groups all across the country re-enacting different areas of American history, ranging from the Civil War to the French and Indian War.

He eventually joined The Corps Discovery of St. Charles, Mo., which had its sights set on educating the public about the adventures of Lewis and Clark as the historic explorers mapped the United States from the Atlantic to the Pacific oceans.

After years of preparation, and in time for the bicentennial celebration, the Corps of Discovery set out on its mission to re-enact the river travels of Lewis and Clark’s voyage.

With three replica keelboats made by group members decked out in period clothing and supplies, the group started its first leg of the journey in late 2003. For several months, the group read the diaries of Lewis and Clark and traveled the same route on the same days as Lewis and Clark reported they and their companions had.

Starting in August in Elizabeth, Pa., which is where Stanley said Lewis and Clark had their original keelboat made, the group made its first leg of the journey down the Ohio River and up the Mississippi River. By December, they made it to Wood River, Ill.

In Wood River, Stanley said many members of the group stayed the winter in a fort that another member had made prior to the journey.

“When Clark got (to Wood River) on the original expedition, they had to build their own fort to spend the winter,” Stanley said.

Stanley said the Corps of Discovery had as few as 14 people and as many as 60 people representing 33 states on the voyage at any given time. Because the people involved in the re-enactment had lives in the modern age, Stanley said group members were present for as much of the journey as they could be.

Many of the group’s members, Stanley said, were descendents of either Lewis or Clark or some other member recorded on the expedition’s roster.

Each re-enactor was assigned a character to play. Stanley said four different men played Clark and another four men played Lewis at various points of the trip. Stanley’s character was Pvt. Richard Windsor, who was recorded on the original roster as joining the expedition in January 1804.

Prior to the trip, Stanley said the group’s members were asked to read books and study the expedition so they could be well educated and replicate the adventure as accurately as possible.

The group tried to stay accurate to the diaries and the period, Stanley said, but were slightly restricted by modern-day laws. For example, Stanley said the group had to do its hunting for food in the grocery store because of laws surrounding hunting seasons and licenses.

“We had one foot in each era,” he recalls.

But there were many occasions where the group’s re-enactment was startlingly similar to the expedition described in those old diaries.

In the fourth leg of the journey, in the territory of the Chinook American Indians along the Pacific Coast, Stanley said the tribe presented the group with salmon on a bed of fern leaves, just as it had done for Lewis and Clark.

There were also instances when the re-enactment mysteriously and eerily followed the diaries.

In Montana, the re-enactors saw the Big Horn Sheep on the same day that Lewis and Clark reported seeing the elusive animal.

“We never saw it before that or after that and (Lewis and Clark) never reported seeing it again,” Stanley said.

The rudder of the re-enactment’s boat also was damaged within two weeks of the same issue happening to Lewis and Clark.

“It felt really good,” Stanley said of recreating the historic expedition. “What we found was a real respect for these people and what they went through (on the expedition).”

Many times, school groups were brought into the re-enactment’s camp and Stanley said group members talked to them about various aspects of the historic journey. From building a fire and weaponry to cooking on an open flame, Stanley said the education portion of the trip was the most rewarding.

“When I was in school, (the lessons) were so minute with the information about Lewis and Clark. I barley remember it,” Stanley said. “But if it wasn’t for Lewis and Clark, the country wouldn’t have the same geographical territory it has now. It was an epic journey.”