Basehor-Linwood football coaches and players didn’t mention the past when preparing for Tuesday’s bi-district playoff opener against Hiawatha.

The Basehor-Linwood football team hammered Hiawatha 49-6 in the bi-district round of the Class 4A state playoffs. The Bobcats improved to 10-0. Enlarge video 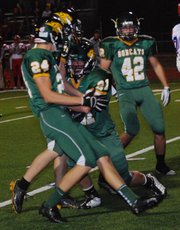 They didn’t mention the Sumner Academy loss at the end of last season.

No monkeys hopping off of backs were mentioned either.

Instead, the Bobcats learned from the past but didn’t dwell on it. They focused on the future and did everything they could to prepare for a run in the Class 4A state playoffs. Players returned to the weight room almost immediately after last year’s loss to Sumner, all of them sharing the goal of preparing for their first 2011 playoff game so they’d be ready to make the most of the opportunity.

Tuesday at home against Hiawatha, that preparation met reality and the Bobcats were ready.

“We worked for where we wanted to be,” BLHS coach Steve Hopkins said. “We focused on having a good start to the game. We felt like if we played well that they would struggle.”

The Bobcats had the start they were looking, scoring 35 points in the first quarter on their way to a 49-6 victory over the Red Hawks.

On the first drive of the game, quarterback Colin Murphy threw a 64-yard pass to wide receiver Ryan Murphy, setting the ball up on the 2-yard line. A play later, senior running back Jesse Hiss rushed for a 2-yard touchdown.

With the score, the Bobcat faithful could relax a little bit, Hopkins said. The memories of previous playoff losses vanished.

Hiawatha punted the football on its first possession. Basehor-Linwood took over in good field position and scored when Drew Potter rushed for an 8-yard touchdown.

On the ensuing kickoff, Hiawatha ran a reverse to Denzel Chilcoat who fumbled the football. Basehor-Linwood’s Paul Rehm recovered the ball deep in Hiawatha territory.

Murphy threw a 12-yard pass to Ben Johnson and then Hiss scored on a 3-yard run. Just like that, the lead was 21-0.

Hiawatha fumbled the ball on its next possession when quarterback Madison Campbell’s pitch missed its target, and Dalton Mellies recovered. A play later, Hiss rushed for 5-yard touchdown and the Bobcats led 28-0 less than six minutes into the game.

Hiss was playing about 80 percent in the game, and Hopkins said it was a great to get him back into the rotation. Hiss suffered a leg injury earlier in the season and is just now getting to a point where he can rush the football effectively.

The two teams traded possessions on the next two series before Basehor-Linwood scored on a 13-yard touchdown pass from Colin Murphy to Ryan Murphy.

The score was 35-0 at the end of the first quarter.

On the first play of the second quarter, Potter rushed for a 46-yard touchdown run and BLHS led 42-0.

On the Bobcats’ next drive, Mellies rushed for a 1-yard touchdown. The score was 49-0 at halftime and Basehor-Linwood was able to pull its starters.

Hiss had three touchdowns and 79 yards rushing by halftime. Potter finished with 114 yards and two touchdowns. Ryan Murphy had 77 yards receiving and a touchdown. Colin Murphy threw for 89 yards with one touchdown and an interception.

The second half the game was played with a running clock. Neither team passed the ball in the third quarter, and each squad had a lengthy drive without scoring.

In the fourth quarter, Basehor Linwood was driving when backup quarterback Zac Hevel was intercepted by Conner Bingham with eight minutes to play.

Chilcoat ran for a touchdown with four minutes left in the fourth quarter. The extra point attempt was no good.

When the game was over, players posed for a picture with the bi-district championship trophy.

“Sing your song,” Hopkins called out to his players.

With that, players joined in singing with Journey song, ‘Don’t stop believing’ blaring in the background.

It was one final, lighthearted moment for the Bobcats on a feel-good night. After a final huddle, they immediately turned their focus to their next opponent.

“This game doesn’t matter as much now,” Colin Murphy said. “We have to go ahead and get ready for Eudora.”

Basehor-Linwood (10-0) plays host to Eudora (9-1) at 7 p.m. Saturday in the next round of the Class 4A state playoffs. Eudora advanced with a 12-0 victory against De Soto.