Basehor-Linwood linebacker Drew Potter wraps up Eudora quarterback Derek Webb for a loss during the first half. BLHS made the stop, but Eudora won the game 28-21.

Basehor-Linwood football players received the call from the sideline and knew they had to make a play or the season was over.

Bobcats fall to Cardinals in 4A playoffs

Basehor-Linwood's football season ended with a 28-21 loss to Eudora in the second round of the Class 4A state playoffs. Enlarge video 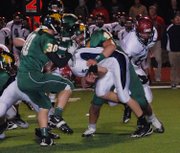 The Bobcats faced fourth and 38 from near midfield. There was less than a minute left to play in their Class 4A state playoff second-round game against Eudora.

“There are not a lot of plays that you can call for fourth down and 38,” BLHS coach Steve Hopkins said later.

The Bobcats snapped the football and quarterback Colin Murphy dropped back to pass. He threw the ball deep to his brother, Ryan Murphy, but the ball fell incomplete.

Eudora players began to celebrate. They led 28-21 with less than a minute to go. After taking a knee, the Cardinals rejoiced as the final seconds ticked off the clock.

Eudora (10-1) earned a spot in the next round of the playoffs. Basehor-Linwood (10-1) headed to the locker room for the final time.

The Cardinals essentially outlasted Basehor-Linwood in a game where both teams ran their prospective styles of offense with the Bobcats favoring the pass and Eudora running the ball, lining up and attempting to trap the Basehor-Linwood defense.

The game was tied 15-15 entering the decisive fourth quarter.

Early in the quarter, Basehor-Linwood went ahead with a 14-play drive. On second and 9, Colin Murphy tossed a pass to Jesse Hiss out of the backfield. Hiss was almost an afterthought in the receiving game as Ryan Murphy, Ben Johnson and Tanner Garver had torched the Cardinals’ secondary throughout the drive. Hiss caught the ball in the flat near the left sideline and raced 20 yards for a touchdown. The two-point conversion attempt failed, but BLHS led 21-15.

With the drive, Basehor-Linwood had momentum.

Eudora though answered with an 87-yard touchdown run by quarterback Derek Webb on first down. Webb sprinted through the line of scrimmage and went untouched for the touchdown. The extra point failed after a bad snap, and the game was tied.

Basehor-Linwood attempted to reclaim the lead, but a Colin Murphy pass was intercepted by Eudora’s Andrew Ballock on the next possession after the ball was tipped. Eudora turned the turnover into points with an 18-yard touchdown pass from Webb to Gabe Cleveland.

The extra point attempt was good and the Cardinals led 28-21.

Basehor-Linwood again began to drive the ball, but on third down Colin Murphy’s pass was picked off by Ballock at the 2-yard line.

The BLHS defense forced the Cardinals into a three-and-out and gave the Bobcats one final opportunity with two minutes left. Colin Murphy completed two passes to Johnson and another to Tanner Garver, but an offensive pass interference penalty on Johnson, a quarterback sack and two incomplete passes ended the drive.

In the end, Eudora won the game by forcing four turnovers and making enough plays to come out on top.

The Bobcats, though, were not without some highlights of their own.

With 8 seconds left in the first half, Colin Murphy rolled out of the pocket and threw a 41-yard touchdown pass to Ryan Murphy in the back of the end zone.

Ryan caught the ball and got two feet in the back of the end zone as the Basehor-Linwood stands went crazy. The score was 15-14.

Garrett Kahle kicked the extra point and the score was 15-15 at halftime.

The game had a little bit of everything in the first half.

Eudora scored first in the game on a six-play, 58-yard drive. Webb finished the drive with an 11-yard touchdown run. Lucas Becker kicked the extra point for Eudora. The score was 7-0.

Basehor-Linwood answered with a 15-play 71-yard drive that culminated with a pass from Colin Murphy to Ryan Murphy. Colin Murphy was effective running the football on the drive. The twins then connected on the conversion and gave BLHS an 8-7 lead with 3:30 left in the first quarter.

On its next drive, Eudora scored on a 44-yard touchdown run by Derek Webb on the final play of the quarter.

Both defenses forced stops throughout the second quarter.

With 4:13 left in the second quarter, Webb’s pass was intercepted by Tanner Garver. On the next play, Potter fumbled the football and Brandon Englebrecht recovered it.

Basehor-Linwood held on fourth down when Dalton Mellies made a big tackle on Gabe Cleveland. On the next drive, Colin Murphy took over. He hit four of five passes for 87 yards. Out of a timeout, He threw a 41-yard touchdown to his brother.

For more about the game, check back soon.