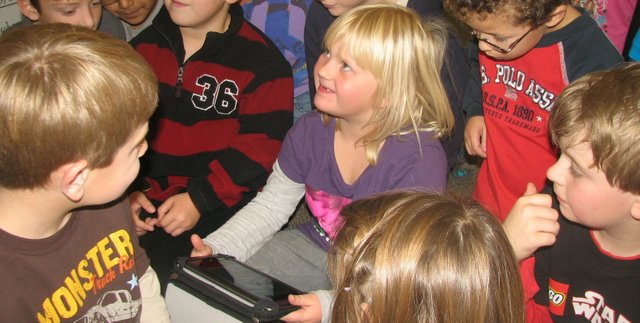 Basehor Elementary School first-grader Piper Rusk tries out a Nook Color tablet device during class Tuesday, as other students look on. The students looked at a device owned by teacher Amy Scruggs while waiting for their own classroom tablets to arrive, thanks to a $600 grant from the Basehor-Linwood Education Foundation.

Basehor Elementary School kindergartners Olivia Weber, Gunnar Scrivener and Mason Kuntz reflect on the news that a $600 grant ("it's, like, a hundred thousand tons") will help purchase two Nook tablets for their classroom. Enlarge video

First-graders get a look at a Nook

Cynthia Fletcher's first-grade class at Basehor Elementary reacts with enthusiasm after Fletcher shows them a Nook Color tablet device. Fletcher borrowed the tablet from kindergarten teacher Amy Scruggs to show the students what they had to look forward to after the Basehor-Linwood Education Foundation awarded a $600 grant for two of the tablets. Enlarge video

All it really took to get Amy Scruggs’ kindergartners fired up on Monday was the sight of two visitors coming into their classroom with a five-foot-long check.

But when they found out the check would buy them some new digital goodies that they’d never seen before, their eyes really popped, Scruggs said.

“They were excited about the check, just because somebody different came in with a large check,” said Scruggs, who teaches kindergarten at Basehor Elementary School. “Then when I told them what it was, they were really excited.”

The check, which was made out to Scruggs and delivered by Basehor-Linwood Superintendent David Howard and BES principal Teri Boyd, was for $613.86 — or, as kindergartner Mason Kuntz put it, “like, a hundred thousand tons” of money. An identical check went to BES first-grade teacher Cynthia Fletcher, and together the two are using the funds on four touchscreen tablet devices they say will open new possibilities for their students to read, learn and have some fun.

With their grants, Scruggs and Fletcher are purchasing four Barnes & Noble Nook Color tablets, which sell for $200 each on barnesandnoble.com, and e-books and applications with which to stock them. The two got the idea earlier this year after Scruggs received a Nook Color for her birthday and got to thinking about its possibilities in the classroom, Scruggs said.

Perhaps the biggest benefit of the devices will be the interactive children's e-books they offer, Fletcher said. The books give the students the option of reading on their own or listening as the device reads to them, which Fletcher said should allow the students to make their way through trickier, higher-level books than they could read on paper.

“Instead of just sitting and reading a book, they're going to be able to actually interact with it,” Fletcher said.

And the interactive books' bright animated colors and sounds will give reading some additional attraction, she said.

“It's given them another avenue, another way to get interested in books,” Fletcher said.

On Tuesday, Fletcher showed her students Scruggs' Nook to give them a preview of what they'd be getting. When she asked the first-graders what they thought, they responded nearly in unison: “Coooool!”

“It's like lots of books inside a computer,” first-grader Braeden Schnabel said while the class discussed what the tablets could do.

Fletcher said she'd told her students about the possibility of purchasing the tablets months ago when she was applying for the grant from BLEF, and they've been waiting in anticipation since. Scruggs, though, waited until Monday, when Howard and Boyd came to class with the giant check, to tell the kindergartners about the project.

The two teachers plan to combine their classes for a book club where students can discuss what they've read on the tablets, they said. Fletcher said the first-graders may use an application to publish their writing online, while kindergartners will likely use some phonics and alphabet learning apps to work on their reading skills, Scruggs said.

BES first-grader Brianna Shaver said she was happy the “Nook books” were coming.

“You can read by yourself, and then you can make sure you get that book right,” Brianna said.

Kindergartner Gunnar Scrivener said he’d never seen one of the devices before, but he was excited to see what they were all about.