Back to the state playoffs!

Bonner Springs running back Jared Knernschield looks for room to run during the Braves' 49-14 victory against Washington.

Kansas City, Kan. — Faced with an opportunity to secure a berth in the Class 5A state playoffs, the Bonner Springs High School football team left nothing to chance Friday at Washington. 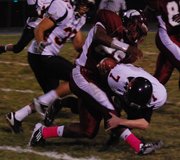 The Braves scored four touchdowns in the first 10 minutes and never looked back in a 49-14 rout that, coupled with Lansing’s 33-12 victory against Schlagle, locked up a playoff berth for the Braves.

“Lansing wins, so that locks us up,” BSHS coach Lucas Aslin said. “Now we get to go play them. We want to win the district; that’s our goal. We’re going to go out there and play hard. It’s a good feeling to know that we got in.”

The Braves wasted no time asserting control against Washington. They reached the end zone on the third play of the game when quarterback Jordan Jackson pitched the ball to his brother, running back J.J. Jackson, who then dropped back and fired a pass to wide receiver Joseph Dooley on a fly pattern down the right side for a 59-yard touchdown. An ineligible man down field penalty negated the touchdown, but only for a moment. Jordan Jackson connected with Stevie Williams for a 29-yard pick-up, and then the pair hooked up again as Jackson found Williams in the back right corner of the end zone for a 35-yard touchdown. Nate Mitchell’s extra point gave BSHS a 7-0 lead just 95 seconds into the game.

Bonner Springs forced Washington into a three-and-out, and three plays later Jordan Jackson threw a 28-yard touchdown to Williams. That gave the Braves a 14-0 lead with 7:09 left in the first quarter.

After another Wildcats three-and-out, the Braves used six runs by J.J. Jackson during a nine-play, 70-yard drive and capped it with an 11-yard touchdown pass to Monte Cox. Washington fumbled the ball on the first play of its ensuing possession, and the Braves needed just two plays to score again. After a double reverse to Williams went for a 3-yard loss, J.J. Jackson took a toss play to the right side, bounced off a Washington defender and powered his way into the end zone. Suddenly the Braves led 28-0, and there was still 1:50 to go in the opening quarter.

From there, Bonner Springs stuck to the ground game. Knernschield carried the ball on 11 straight plays to end the first half as the Braves marched 64 yards to the Wildcat 1-yard line when the first-half buzzer sounded.

The Braves outgained Washington 345-69 in first-half yardage despite sitting some of their starters for most of the second quarter.

“That was the best first half we’ve had all year,” Aslin said. “We came out and played well. We’re starting to click offensively a lot more. We played well defensively, so I was really impressed.”

The Braves’ reserves weren’t able to expand the lead during their extensive playing time in the second half. After a 14-yard touchdown run by J.J. Jackson gave BSHS a 49-0 lead with 8:24 to go in the third quarter, the reserves played the rest of the way. The next three BSHS drives ended with a failed fake field goal attempt and two fumbles. The second fumble led to Washington’s first score as running back De’Ante Ambler raced 76 yards for a touchdown on the first play of the ensuing drive and pulled the Wildcats within 49-6 with 11:34 left in the fourth quarter.

Washington tacked on a touchdown on a 1-yard run by Sai-Vone Love with 4:46 to go. The 2-point conversion made the score 49-14.

Bonner Springs (5-3 overall, 2-0 district) next plays at 7 p.m. Friday at home against Lansing. The winner will be the district champion. Aslin said having a playoff berth already secured takes some of the pressure off of the game with Lansing, but the expectations will not change.

“It gets the pressure off, but we still want to do what we want to do,” he said. “We still want to go into the playoffs on a good note. It makes it a little bit easier on you that you can do different things; that you don’t have to sell out and do things that you normally wouldn’t do to try to make the playoffs.”