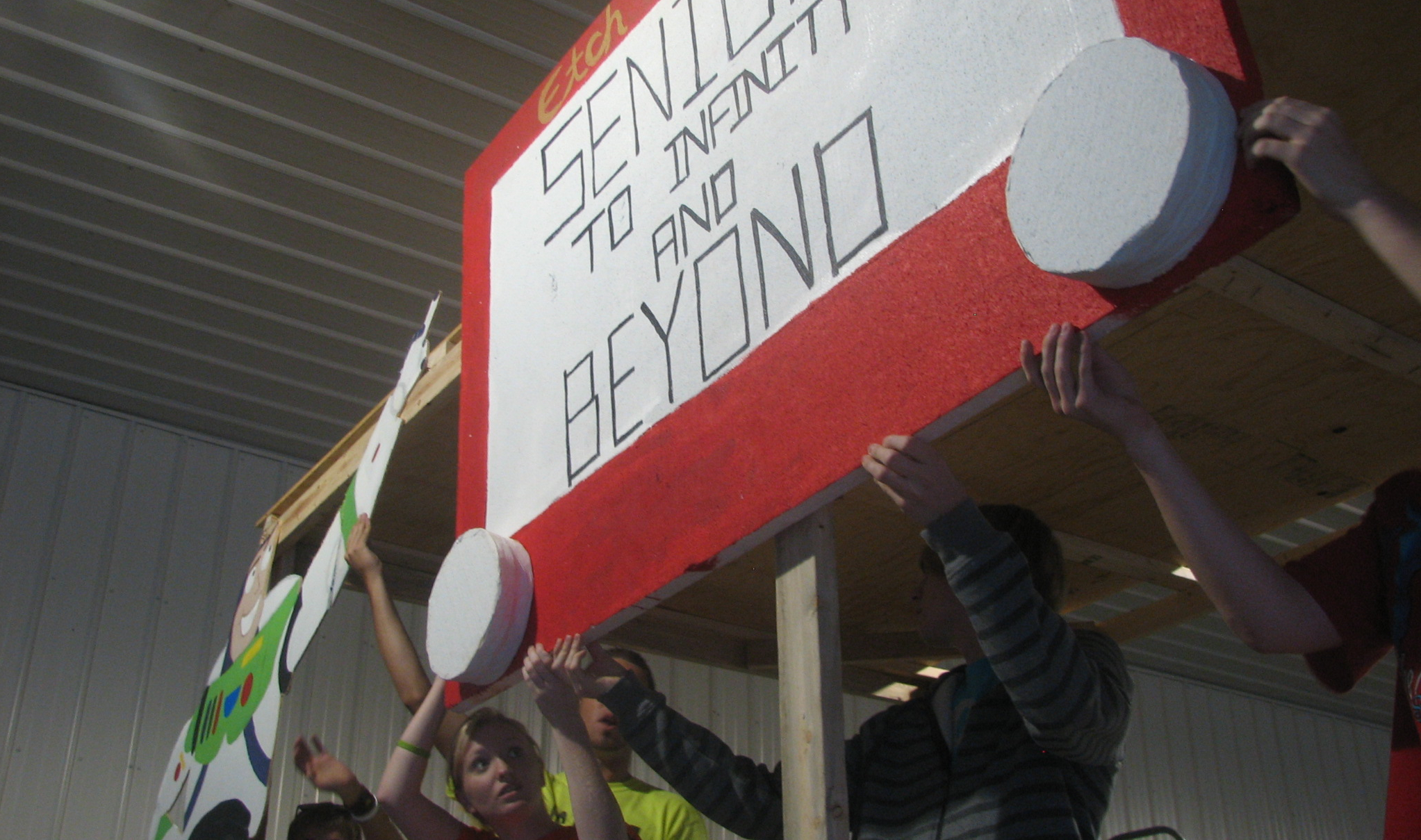 Basehor-Linwood High School seniors, including (from left) Caitlyn Clark, Bryce Garver and Alec Shandy, hoist a model Etch A Sketch onto their “Toy Story”-themed class float Tuesday in preparation for the Basehor-Linwood Homecoming Parade. The parade begins at 5:30 p.m. on Friday and will run from Leavenworth Road to Parallel along 155th Street. Enlarge photo

Basehor-Linwood High School's homecoming is scheduled for Friday, Sept. 23. The theme for this year's activities will be “Under the Big Top.”

Festivities will begin at 8:15 p.m. Thursday, Sept. 22, with a bonfire behind the high school. The public is invited to attend.

The homecoming parade is set to begin at 5:30 p.m. Sept. 23. The route will run along 155th Street, from Leavenworth Road to Parallel Road. All parade participants should meet at 5 p.m. in the following locations:

Parking will be available in the field between the former Sixth Grade Center and Basehor Elementary School, 15602 Leavenworth Rd., for parents dropping off parade participants.

At the start of the parade, the following streets will be blocked off until the conclusion of the parade: 153rd Terrace, 156th Street off Leavenworth Road, Poplar Street at 155th Street and Parallel Road at 155th Street. Officers will be stationed along the route to shut down cross-traffic as needed.

Motorcycles and dirt bikes will not be allowed to enter the parade. Parade winners will be announced at the football game Friday and posted on the marquee in front of the high school. You must register your entry with the BLHS office at (913) 724-2266 before Sept. 23 in order to be eligible for cash prizes.

The homecoming candidates, princes and princesses will be introduced and the king and queen will be crowned at halftime of this year's homecoming game, against Bonner Springs. The game begins at 7 p.m. Sept. 23.

The BLHS Booster Club will provide a “Meal Deal Dinner” for purchase for anyone going to the parade or football game, available from 5:30 to 6:45 p.m., while supplies last. The picnic-style dinner will include chips, bottled water and a choice of a barbecue sandwich or a hot dog, at a cost of $5. The Booster Club will serve the meals just east of the main football gate at BLHS. Purchases will support the Booster Club and athletics, academics and fine arts at BLHS.

The “Under the Big Top” dance will conclude the festivities after the football game, running until midnight at BLHS.