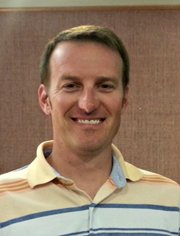 Spencer Fritz officially took his seat as a member of the USD 458 school board on Monday.

Officers have been elected for the 2013-14 USD 458 board of education, which had its first official meeting Monday at the district offices.

Following the elections, superintendent David Howard gave a report, which included news of an upcoming audit, budget information and an update regarding an upgrade of the district’s technology infrastructure. Howard also announced an increase of about three percent for the 2013-14 property and casualty insurance renewal.

In other business, the board:

• Voted, 5-0, to appoint Howard as the district’s suspension and expulsion officer, representative to outside agencies, compliance officer for federal programs and coordinator for homeless children duties. Assistant superintendent Mike Boyd was also appointed as the food service hearing officer.

Redmond and board member Richard Zamora were absent from the meeting. The board will next meet for its annual workshop on July 31.

Fritz takes seat on school board

Spencer Fritz, the board’s only new face this year, officially became a member on July 1 and attended his first meeting on Monday.

Fritz, the assistant plant manager at American Dish Service in Edwardsville, has been heavily involved with local youth in recent years. He is the president of the Linwood Parent Teacher Coalition and has coached youth baseball in the area for several years. His son, Gavin, 10, will be a fifth-grader this fall at Linwood Elementary School.

Fritz ran unopposed for the board position last spring. He replaces former board member Gary Johnson, who chose not to run for re-election after eight years on the board. Fritz will occupy board position No. 6, which includes all territory south of the Sherman Township boundary line and extending to the Kansas River.