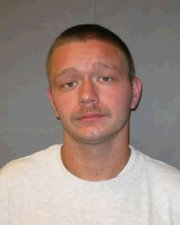 Kyle T. Flack, mugshot courtesy of Kansas Department of Corrections, was arrested Wednesday morning in connection with a triple homicide in Ottawa.

A 27-year-old Ottawa man has been arrested in connection with a triple homicide discovered in Ottawa Monday.

• Three bodies were found Monday at a property in rural Ottawa Monday.

• The Franklin County Sheriff's Office is treating the case as a homicide, but has not identified the victims.

• The victims include two men and a woman.

• Relatives fear a missing 22-year-old woman could be one of the victims. The woman's 18-month-old daughter is also missing.

• A 27-year-old Ottawa man has been arrested in connection with the triple homicide.

Kyle T. Flack, sought by police Tuesday as a person of interest in the homicides, was arrested early Wednesday morning, according to reports issued by Franklin County Dispatch.

It's not clear where or exactly when Flack was taken into custody, and the Franklin County Sheriff's Office did not have new information Wednesday morning. Flack served four years in prison for the 2005 shooting of Ottawa resident Steven Dale Free, 47, who was found in his front yard with multiple small-caliber gunshot wounds. Flack was convicted in Franklin County of attempted second-degree murder and was paroled in 2009.

Police have not identified the two men and a woman whose bodies were found Monday on a property in rural Ottawa, and relatives fear a missing Olathe woman may be one of the three victims. That woman's 18-month-old daughter also is missing, officials say.

The missing woman, Kaylie Bailey, and her daughter were reported missing May 3 and were last seen May 1. Franklin County Sheriff Jeff Richards said an Amber Alert for the missing child has not been issued and a child was not found at the property.

The bodies were found on Monday on the property at 3197 Georgia Road, about five miles west of Ottawa.

Kortni McGill, Ottawa, was one of the visitors who reported the smell, and said she found the female victim in the garage of the home. The body was covered in a blue tarp with a cinder block on top of the head, McGill said Tuesday.