Basehor — It's difficult for Cassie Batesel to point to the exact moment she realized her passion for photography.

It may have been joining the photo imaging class at Basehor-Linwood High School or it may have been simply snapping pictures of her own family using her phone and other cameras. Either way, her photos were trying to tell her something and now, as just a sophomore at BLHS, she is turning her new-found passion into a small business.

Batesel said she initially began posting her images on social media sites like Instagram and began getting the attention from her friends and family. Then, for Christmas this year, she got a Canon T-3 camera from her parents that has allowed her passion to blossom. 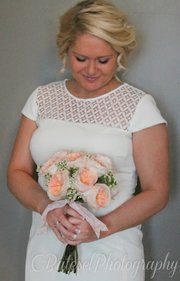 "I really want to turn this into a career," Batesel said.

While taking classes in the media technology career pathway, Batesel has worked closely with teacher Kristen Loney. Loney said recently that Batesel has a talent for portrait photography that Loney rarely sees. In addition to portraits, Loney says Batesel's talent is really being expanded because of her willingness capture anything from family members to basketball action at BLHS.

Examples of Batesel's photography can be found on her website cbateselphotography.weebly.com.