Madison McDowell and the BLHS girls bounced back from a semifinal loss to beat Ottawa in the Bobcat Invitational third-place game, 52-36. 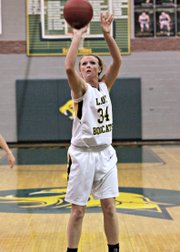 Victoria Smith, who averaged 18 points in three BIT games, was named to the all-tournament team.

Basehor — The Basehor-Linwood girls hoisted the third-place trophy of the Bobcat Invitational on Saturday afternoon after a dominant defensive performance.

The Bobcats returned to form with a 52-36 victory against Ottawa and a dominating the second half, outscoring the Cyclones after the break, 28-16. The Bobcats played a full-court defensive press for most of the game, rebounded and dove all over the floor. Coach Jason Tatkenhorst said the team played “unified” in the effort.

“We put a complete basketball game together,” Tatkenhorst said.

The Bobcats (8-3) had to get back into the groove of their traditional defensive press after testing out a zone defense on the St. Joe Benton (Mo.) girls on Thursday in a 47-24 BLHS loss.

The Cyclones were able to break the Bobcats’ defense in the first quarter several times on the way to starting the game with a 14-12 lead. The Bobcats buckled down in the second quarter, though, forcing six straight turnovers in the first four minutes. The result was a 9-2 run for the Bobcats.

“Getting those couple of steals kind of loosened us up and we really played well the rest of the first half,” Tatkenhorst said.

Senior Victoria Smith scored 10 of her game-high 23 points in the first half with a strong effort in the paint against a taller Ottawa defender in Brette Moore. Alex Gorman, who finished with seven points, put a ribbon on the Bobcat-dominated second quarter with a 3-point shot from the top of the arc as the first-half buzzer sounded.

“That shot gave us a lot of momentum going into the rest of the game,” Tatkenhorst said.

BLHS took that momentum and started the second half with an 8-2 run.

Ottawa found itself in foul trouble about halfway through the third quarter, sending the Bobcats to the line 12 times in the last two quarters. The Bobcats used free throws as an aid in establishing their lead and to thwart any chance at a comeback by the Cyclones, sinking 18 of 21 shots from the line.

Tatkenhorst said his team’s production at the free throw line and the willingness of his entire offense to shoot open shots showed the confidence players gained during the tournament.

“I thought (Saturday), everyone on the court was confident that they could score,” he said.

Smith, later named to the all-tournament team, was the only Bobcat to reach double figures. She averaged 18 points per game in three games.

Tatkenhorst, pleased with his team’s all-around game, said going 2-1 in the tournament was a good result that bodes well for them heading into the rest of the season.

“This is big for us to be 2-1 against some very good competition,” Tatkenhorst said. “We talked (Saturday) about now taking this confidence with us into February.”

BLHS needed some late-game heroics from Smith to win their tournament opener — a 41-39 victory Jan. 20 against Pembroke Hill. Smith hit a game-winning shot with four seconds left. The Bobcats’ first-round luck didn’t carry over into the semifinals, though, as they let a tie game at halftime turn into a 23-point loss.

BLHS will be back at home at 6 p.m. Friday for a meeting with De Soto.

— Justin Nutter contributed to this story.