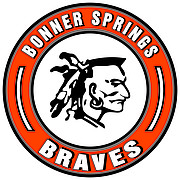 The Braves had only one first-place finisher with Michael Amayo winning the long jump (21-01.00), but were able to score enough points elsewhere to edge Lincoln Prep (94) and Basehor-Linwood (85).

Individual second-place finishers for Bonner Springs included Jonah Freese in the long jump (20-08.00) and Jacob Dobbs in the discus (130-06.50). The Braves also took second in the 4x100-meter relay with a time of 44.82. That team was comprised of Freese, Chris Broome, Marcell Holmes and Alonzo Hokes.

Jon Poorman is the sports editor at The Chieftain and The Sentinel. Follow him on Twitter at @JonPoorman for all of the latest community sports news.