Basehor-Linwood defeated Bonner Springs 10-0 and 4-0 on Thursday evening at home.

Basehor — The Basehor-Linwood softball team proved to be too much for Bonner Springs to handle on Thursday evening as the Lady Bobcats rolled to a doubleheader Kaw Valley League sweep. 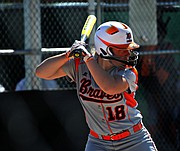 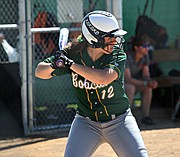 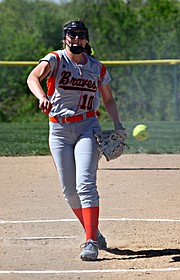 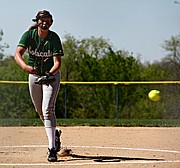 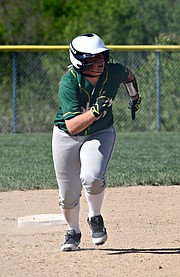 Basehor-Linwood struck early in Game 1 before crushing to a 10-0 victory in five innings. The Lady Bobcats scored three runs in the second inning, added five more in the fourth and finished off the game with two in the fifth.

Basehor-Linwood scored four runs in the first three innings of the second game, and that’s all it would need as the Lady Bobcats held on for a 4-0 victory.

“I like the fact that our team comes out and plays Bobcat softball,” said Basehor-Linwood coach Susan Mayberry, whose team improved to 14-2 this season. “We just find a way to get the job done. We have a lot of support for each other, and that’s huge.”

The Lady Bobcats were led by pitcher Ashley Hoffman, who threw 12 shutout innings while only allowing a handful of hits.

“She always comes in prepared to pitch, and she wanted the ball,” Mayberry said. “She had a good presence on the mound like she’s always had. She was locating well today and overpowered the hitters today.”

Hoffman helped her own cause in the second inning of Game 1, hitting a solo home run to give her team the early lead. Rachel Kaminski and Kali Jacobson each followed with sacrifice flies later in the inning, increasing the lead to three.

The fourth inning is where Basehor-Linwood really broke the game open. Jacobson led off the frame with a solo home run, and Jenna Donnelly followed with an RBI double. Donnelly and Kaminsky each scored on errors to cap an inning in which the Lady Bobcats scored three runs with two outs on the board.

Basehor-Linwood ended the game in the fifth after Donnelly and Kaminsky each recorded RBI singles.

“I think we were focused and in tune with what we were trying to accomplish,” Mayberry said. “I think we played with a lot more energy that first game, and then the second game, I don’t know that we could have adjusted better to their pitching.”

The Lady Bobcats struck early once again in the second game, scoring two runs on an RBI double from Donnelly in the first inning. Hoffman hit an RBI double in the third, and Donnelly capped the scoring later in the frame with a sacrifice fly.

“We had some hard-hit balls, but they were right at people, and we got doubled off a couple of times,” Mayberry said. “The thing about us is we’re able to play through things and not get hung up on somebody making a mistake. We’re able to back each other up, and I think we’ve grown up a lot in that aspect.”