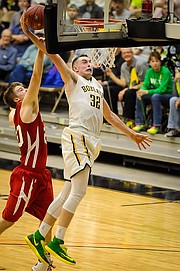 Basehor-Linwood forward Pat Muldoon goes up for a dunk against Wellington on Wednesday at the Class 4A-I state tournament.

Muldoon, a 6-foot-7 forward, was a first team all-state performer in his senior season, helping the Bobcats reach the Class 4A-I title game. Basehor-Linwood finished as the state runner-up with a 24-1 record.

Muldoon was also chosen as Basehor-Linwood's Male Senior Athlete of the Year.

Eastern Illinois competes at the Division I level in the Ohio Valley Conference and finished last season with an 18-15 record.