Eric Scott is the reigning Class 4A high jump bronze medalist, so when the football came in his direction on the final drive of Basehor-Linwood’s regional playoff game against Louisburg, he utilized his greatest strength to put his team’s victory on ice. 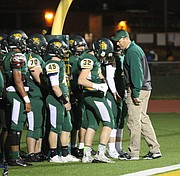 BLHS coach Rod Stallbaumer talks to his team before the Bobcats' playoff game against Louisburg. 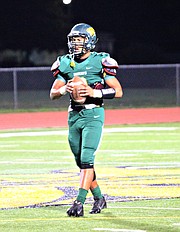 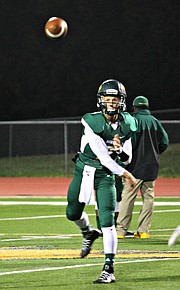 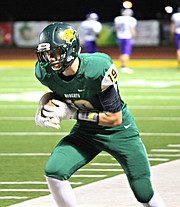 Nick Fisher was the Bobcats' leading receiver against Louisburg on Friday. 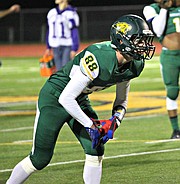 Jackson Brimblecom scored a receiving touchdown against Louisburg on Friday.

Scott’s leaping interception with just 29 seconds remaining sealed a 41-34 triumph for the Bobcats (6-4) in what was an exciting, back-and-forth game with the Wildcats (7-3) at Basehor-Linwood High School.

“I saw the receiver open up to a hitch-and-go, so I had to recover back on him,” Scott said. “I caught back up with him, and then my long arms kind of went and got the ball. I was excited. … Composure was going to keep us in that game. I owe it all to our captains on the team because they kept us under control and calm. It’s a good win for us.”

With the win, the Bobcats advanced to the sectional round of the Class 4A-I playoffs where they will square off against Eudora. The Cardinals (7-3) defeated Fort Scott 33-7 at home on Friday night. Basehor-Linwood and Eudora met during the regular season, and the Cardinals came away with a 48-21 victory.

“Eudora came out and beat us pretty handily the first time,” BLHS coach Rod Stallbaumer said. “That’s a game where you don’t often get a chance to try again. Our kids are looking forward to that, and they’re going to be a dang good team. They’re maybe the hottest team in 4A right now. They’ve won seven straight and are playing extremely well, so it’s going to be a challenge."

Tied at 34 with just 3:31 remaining, Basehor-Linwood had just regained possession at their own 41-yard line with an interception by Austin Roberts. After driving deep into Louisburg territory, quarterback Justin Phillips connected with Jahron McPherson on an 18-yard touchdown pass with 1:13 on the clock to put the Bobcats ahead for good.

“I have all the confidence in the world in my coaches and my teammates,” Phillips said. “Every single Thursday we practice two-minute drill, driving down the field for the game-winner. I just visualized that, what I’ve been doing all year. … We had a run-pass option, and I saw an opening for the run, but then I waited a little longer, and Jahron popped open. I just flicked it out to him and let him make a play.”

McPherson was a force to be reckoned with throughout the night, also scoring on an 80-yard kickoff return and a 47-yard run. The latter came at the 9:15 mark of the third quarter, right after Louisburg had tied the game at 20 on a 34-yard run by Thomas San Agustin.

Basehor-Linwood got off to a strong start, taking a 7-0 lead on its first possession of the game with a nine-yard touchdown run by Austin Ettinger. The opening score came on the heels of blocked punt by Nick Fisher, which gave the Bobcats the ball at the Wildcats’ 11.

With five and a half minutes to play before halftime, Basehor-Linwood found the end zone once again, this time on a six-yard pass from Phillips to Jackson Brimblecom. Louisburg answered with a touchdown pass from Austin Terry to Grant Harding with 1:55 left in the half, but McPherson fired right back when he took the ensuing kickoff to the house.

“I was surprised they kicked it because we usually run that reverse play,” McPherson said. “I saw the gap, and I hit it at 100 miles per hour. It was there, and I scored. It was great blocking.”

It looked like the Bobcats would head into the locker room with a two-score lead, but the Wildcats had no plans to end the half quietly. With 21 seconds remaining, Mitch McLellan took a bubble screen pass from Terry and sprinted down the right sideline for a 68-yard touchdown. That made the score 20-14, Basehor-Linwood, at the intermission.

Louisburg kept its momentum going early in the third quarter when Agustin’s touchdown run tied the contest at 20. But McPherson countered with his long scoring jaunt to give the Bobcats the lead once again at 27-20.

Late in the period, Terry scored on a one-yard keeper to pull the Wildcats within one point. But a failed two-point conversion by Louisburg kept Basehor-Linwood in front heading into the final quarter.

Early in the fourth, Agustin plunged in from one yard out, giving the Wildcats a 34-27 advantage. But the final two scores would belong to the Bobcats as Ettinger scored on a 22-yard run and Phillips found McPherson for the game-winner.

McPherson finished with 63 yards rushing on 10 carries, Ettinger had 62 yards on seven totes, and Chas Rollo piled up 45 yards on 11 attempts. The Bobcats rushed for 201 yards in all, averaging 5.2 yards per carry.

Phillips had one of his most efficient games of the season behind center, completing 9 of 13 passes for 124 yards and two touchdowns with no interceptions. Nick Fisher was the Bobcats’ leading receiver with four catches for 55 yards, and Brimblecom caught three passes for 42 yards.

“This group is starting to come together,” Stallbaumer said. “At the beginning of the year, I don’t know if our kids had the confidence to keep playing when they made mistakes. They’ve really, the last two or three weeks, kind of come together where they’re playing for each other, and they’re not doing too much. They’re just trying to do their job. When you do that, when you play for each other like that, you get to be pretty resilient.”

Basehor-Linwood and Eudora will square off at 7 p.m. on Friday at BLHS. The winner will take on the winner between Bishop Miege (9-1) and Paola (9-1).