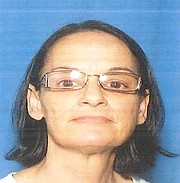 Loretta J. Jewell last was in contact with her family Oct. 18, 2015. Tonganoxie police released a statement Oct. 29, 2015, asking for any information from the public about Jewell's whereabouts.

Tonganoxie police are asking for the public’s assistance in a missing-person case.

Law enforcement officials are trying to find Loretta J. Jewell, 57, a Tonganoxie resident who has been missing nearly two weeks.

Jewell, a white female who is 5 feet 5 inches tall and 120 pounds, has brown medium-length hair and brown eyes.

She last contacted her family on Oct. 18 and has not had contact with them since that day.

Jewell has been diagnosed with schizophrenia and is thought to be off her medication, according to a police media release.