Basehor — With a senior-laden roster and plenty of varsity experience, Basehor-Linwood volleyball coach Amy Irvin certainly had high expectations for her team when the season began. 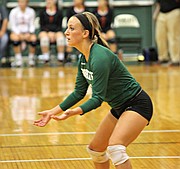 Bonner Springs' Payton Sechrist celebrates after a point against Eudora.

Now, eight matches into the schedule, Irvin is pleased with how her girls have performed, especially on Tuesday evening when the Lady Bobcats defeated Bonner Springs, Eudora and Baldwin on their home court.

The four teams convened for nearly four hours of volleyball, each testing their early-season acumen. It was a night that concluded in exhilarating fashion, as Basehor-Linwood pulled out a 30-28 win over Eudora and Bonner Springs topped Baldwin 27-25 in a pair of Game 3s.

“The last couple of years, we have had talent like you wouldn’t believe,” Irvin said. “It was those gritty games where you have consecutive points on their end here and there. We’ve worked a lot on getting out of those ruts, a lot of drills in practice. I just told them there are very few teams that would have come back [after losing the first game].”

“They played their butts off,” Irvin said. “With three games, it comes down to whoever wants it the most. We played [Eudora] close on Saturday, too. We knew they were good. It was all out, every point, and they definitely earned it.”

“I loved our team chemistry,” Bonner Springs coach Jan Madlock said. “I think a lot of our players have a sense of how they’re going to play with each other. … These matches are important because they help us gauge what we need to work on in practice in order to be where we want to be at the end of the season. We talk about getting better every day, and we know we’re a better team walking out of here than we were walking in.”