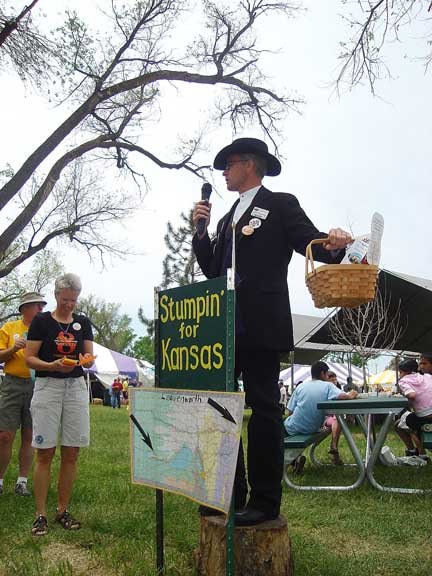 Special to The Current

Bob Topping, host of the Prairie Queen Bed and Breakfast in Leavenworth and a board member of the city's Convention and Visitors Bureau, gives a stump speech promoting Leavenworth culture at the 2007 Kansas Sampler Festival in Garden City. County commissioners, on Monday, approved a funding agreement for the festival should it be brought to Leavenworth in 2010 and 2011 and will pass that agreement on to the four major cities in the county for approval.

Kansas Sampler still on for Leavenworth County in 2010, 2011

As the dust settles after a shakeup of Leavenworth County employees, the future of the county holding the Kansas Sampler Festival remains cloudy.

Board OKs funding for potential festival

County Commissioners took the first step among area governing bodies in signing off on a funding agreement that would be used should the Kansas Sampler Festival be brought to Leavenworth County in 2010 and 2011.

Two-day event could bring thousands to Leavenworth in 2010, 2011

If a meeting Thursday between a dozen government, civic and business leaders throughout Leavenworth County was any indication, communities soon might collaborate in trying to bring an annual festival that celebrates everything Kansas to the area.