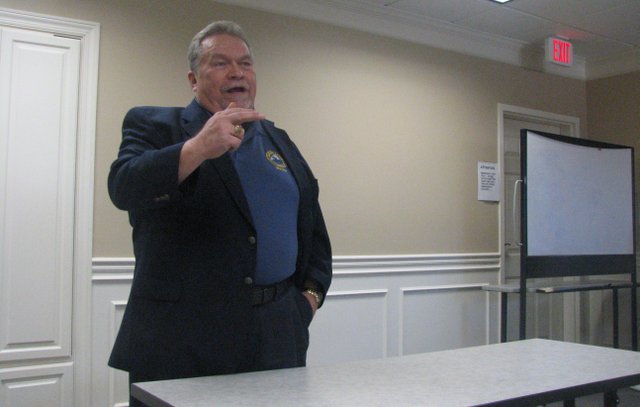 Basehor Mayor Terry Hill gives an update on city government developments during his State of the City address at the Basehor Chamber of Commerce meeting Jan. 27 at Community National Bank in Basehor.

At the top is a title: “Wasteful spending by the Mayor.” At the bottom-right is a total: more than $10,000. But in between, the story is complicated.

Leavenworth County will proceed with a Feb. 28 election for the recall of Basehor Mayor Terry Hill after a judge's ruling Thursday afternoon.

Judge to rule soon on recall election for Basehor mayor

The fate of a possible election to recall Basehor Mayor Terry Hill remained in the air after a hearing Wednesday morning in Leavenworth County District Court, but a judge's decision on the matter could arrive by the end of the week.

Basehor mayor responds to recall allegations in letter to voters

Basehor Mayor Terry Hill, in a letter addressed to Basehor residents that he shared with the Sentinel this past weekend, has responded to a recall petition submitted earlier this month, saying he did not fail in his duties as mayor as the petition alleged.

Another recall petition is hitting the streets of Basehor, this one calling to remove Basehor Mayor Terry Hill from office.

Mayor Terry Hill took an opportunity in his 2011 State of the City address Thursday to give the city’s side of the story about two issues on Basehor residents’ minds lately: the 40-percent sewer rate increase and the new solid waste contract that adds curbside recycling.