Benton Smith covers sports and news for The Mirror. Although he hails from the state of North Carolina and graduated from the University of North Carolina, he assures you that neither that place nor the men's basketball team at said university have much or anything to do with him. Benton was a sports writer for the Lawrence Journal-World before coming to Tonganoxie. He is an avid basketball fan and football devotee but finds himself of late enjoying baseball more than he ever thought possible — he is 99 percent certain that is because the Kansas City Royals are actually competitive. Since joining The Mirror staff in February of 2008, Benton has learned that all high school sports, their athletes and coaches are pretty much a blast to cover.

Bobcat grad Johnson draws praise from KU coaches
By Benton Smith
August 7, 2014
A red-shirt freshman tight end for Kansas University, Ben Johnson hasn’t caught a pass, run a route or played a down in a college football game.
A Devil, you say: Ottawa standout Semi Ojeleye says Duke best fit
By Benton Smith
January 14, 2013
State’s top-ranked returns to area for 2013 Basehor-Linwood Invitational.
Head injuries still on minds: Area schools explore safeguards for athletes
By Benton Smith
02:04 p.m., July 25, 2012 Updated 12:00 a.m.
The words themselves are jarring: traumatic brain injury. That phrase is the simplest definition of a concussion. No wonder the affliction has become a growing concern in the realm of sports, particularly in football.
Basehor-Linwood soccer defeats THS
By Benton Smith
September 28, 2011
The Basehor-Linwood High soccer team held Tonganoxie in check in the second half Wednesday to beat its visiting rivals, 2-1, at BLHS.
Tonganoxie soccer scores late against BLHS for 1st ‘W’
By Benton Smith
September 1, 2011
With a score in the final minutes of the second half, THS earned its first victory of the season with a 1-0 shutout of visiting Basehor-Linwood.
Tonganoxie football coach Mark Elston resigns
By Benton Smith
12:05 p.m., August 31, 2011 Updated 06:56 p.m.
Tonganoxie High football coach Mark Elston has submitted his resignation.
THS trainer excited to see head-injury act passed in Kansas
By Benton Smith
August 23, 2011
Tonganoxie High athletic trainer Mark Padfield did plenty during his summer vacation this year, but the highlight of his break came almost immediately after the school year ended.
Tonganoxie golfers represent KVL, finish 2nd at state championships
By Benton Smith
May 26, 2011
Golf might very well be a game in which the greatest individual garners the glory and accolades, but on Monday at the Class 4A state tournament in Hutchinson, Tonganoxie High learned just how valuable each member of its team could be.
Bonner Springs, Tonganoxie battle to unconventional doubleheader split as both ‘home teams’ claim victories
By Benton Smith
May 12, 2011
The home team on the scoreboard won one game Friday at Leavenworth County Fairgrounds and the team actually playing on its home field won the other game.
Bobcats wallop THS boys
By Benton Smith
February 5, 2011
Any hope the Tonganoxie High boys basketball team had of hanging around with rival Basehor-Linwood Saturday flew out the gymnasium door early. 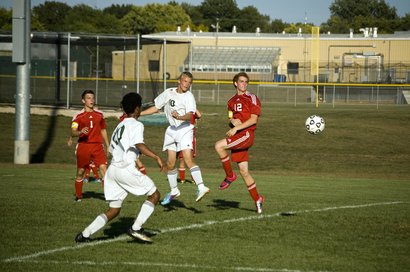 Basehor-Linwood High junior Lane Young and Tonganoxie junior captain Zack Tallent watch the ball's path after Young headed it toward the goal in the second half Wednesday at BLHS. The Bobcats beat the Chieftains, 2-1. 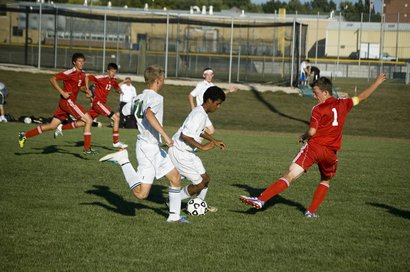 The Bobcats' Zach Ferguson moves the ball up the field as THS senior Marcus Titterington steps in his path in the second half of Basehor's 2-1 Wednesday home victory. 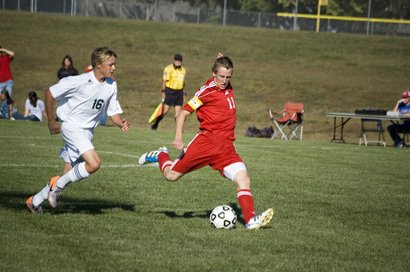 With Basehor-Linwood's Sammy Seaton a step behind, Tonganoxie senior captain Matt Briggs goes for a kick while on the move in the first half of the Bobcats' 2-1 win. 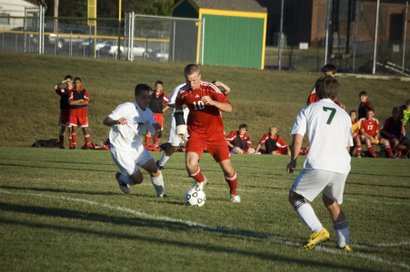 As Deric Brannan closes in, Tonganoxie forward Matt Saathoff turns to find an opening late in the second half of Basehor's 2-1 win. 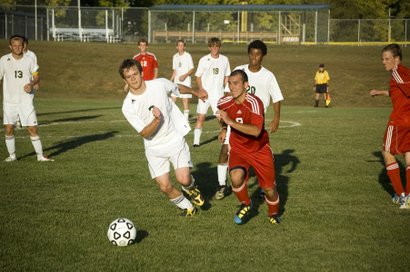 Basehor-Linwood senior Spencer Himpel races Tonganoxie senior Joseph Parrino to the ball in the second half of the Bobcats' 2-1 home victory on Wednesday.